The great artist Ricardo Martinez de Hoyos and my father, Jose E. Iturriaga, were so close that almost sixty years ago, on the occasion of my father’s birthday, Maestro Martinez gave him one of his paintings. It was a “Llorona”. I grew up watching its deep blue mystery against a white wall. I was intrigued by that woman with long loose hair floating in the air and pursued by five dogs or wolves, their fangs open, while in the cloudy sky shone a black moon. Years later, when my father gave me that painting that I had so admired since childhood, I realized it was dated in 1954. It has since hung in the several houses I have lived in for the last twenty years.

In 2006 I had some financial difficulties and reluctantly decided to sell the painting. It occurred to me to consult with Maestro Martinez de Hoyos, who was my neighbour in Cuernavaca, about some of his collectors, but once we were on the phone I did not have the courage to express my intentions. As soon as I gave my name he interrupted me with affectionate memories about his old friendship with my father. When I asked him “do you remember, Maestro, a painting of “La llorona” you gave my father?” he replied enthusiastically, “Of course, a painting in plumbago blue! I gave it to him as soon as it was competed… it was a long time ago…I was very fond of Pepe…

I told him my father was well and lived in Coatepec. They had not met in decades, and he sent my father his warmest regards. We said goodbye and I fortunately did not sell the painting.

Six years later, at the beginning of 2012, Grijalbo Publishers, in charge of printing my novel Lineage of sorcerers (published in September that year), sent me a pdf image of the dummy of the cover. I had goose pimples, since what I saw as the image proposed by the publishers was my “Llorona”! I was certain it had never been out of my sight and I had never allowed it to be photographed.

I ran to ensure that my painting was still in its place and of course there it was. Only then I noticed that in mine the woman is moving in profile but she is facing the viewer while pursued by five dogs, with the moon and clouds in the background, while the image reproduced on the cover of my book portrayed a woman in full profile, thus not facing the viewer. Her breasts were visible, she appeared to be pursued by eight dogs and there were neither clouds nor moon in the background. Nevertheless the colours, the composition and the subject were exactly the same.

I contacted the publishers immediately concerning the painting. One of their representatives, who had recently been to the exhibition of Ricardo Martinez’s works at the Museum of the City of Mexico, had suggested the painting for my cover. The publishing house applied for and was given permission to reproduce it by the Ricardo Martínez Foundation.

I found the number and contacted Pablo, Maestro Martínez’s son and told him about the telephone conversation I had had with his father and asked him about this other “Llorona” on the cover of my book. He was surprised but was able to explain what had happened: my conversation with Don Ricardo in 2006 had triggered his memory and he painted it again with astounding precision as to the colours and the composition, although with some understandable variations, considering that he was then 88 years old and had painted the first version when he was 36!

Was this an extraordinary reproduction of mood, remembrance and perhaps of nostalgic friendship that the Maestro experienced after my call?

– “La Llorona" is Spanish for “The Crying Woman" and is a popular legend among some Spanish-speaking cultures in the Americas, with many versions extant. The basic story is that La Llorona was a beautiful woman who killed her children to be with the man she loved and was subsequently rejected by him.

She drowned the children and then, after being rejected anyway, killed herself. She is doomed to wander, vainly searching for her children for all eternity. Her constant weeping is the reason for her name. In some cases, according to the tale, she will kidnap wandering children or children who misbehave.

Ricardo Martinez
and his Lloronas

The Llorona (or crying woman) is a subject Ricardo Martínez portrayed on four ocassions using different elements, such as dogs, men in pursuit and the moon as a silent witness. He painted the first one in 1954 and the last fifty years later, as recorded by José Iturriaga in his text “La Llorona” treading among us.

and the last fifty years later, as recorded by José Iturriaga in his text “La Llorona” treading among us. 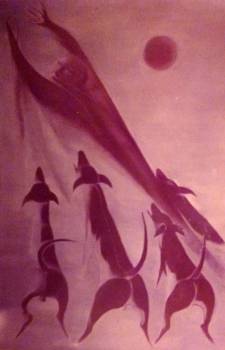 and it was shown only once at the Mexican Art Gallery in June of that year.

The third Llorona is dated in 1959

and was part of an exhibition called Living Legacies, which took place in 2013 in the USA at the Jordan Schnitzer Museum of Art in Oregon. 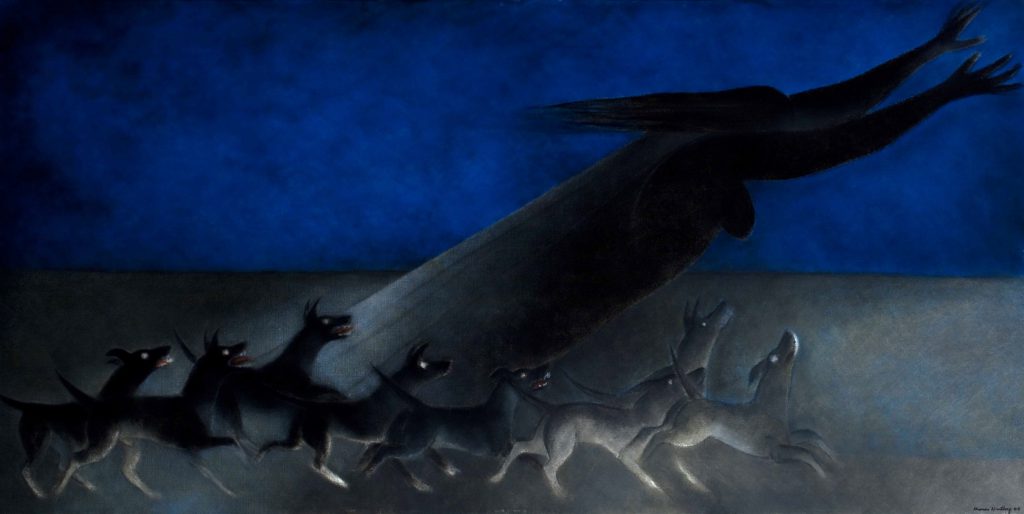 The fourth and last Llorona,

completed in 2004 was the one that made Iturriaga write the text about the “piece of the month” in January, thus closing the cycle of variations on the same theme. This Llorona was shown for the first time as part of the great retrospective exhibition of works by the artist at the Museum of the City of Mexico in 2011.