Work of the month
November 2016

The story of a head

The compilation of material for the catalogue raisonné of the works by Ricardo Martínez has been a painstaking, long and yet satisfactory task. We have already mentioned that it is not only a question of searching and finding, but that often a work has an interesting and/or moving story behind it. The piece of this month is a case in point.

Some months ago, the Ricardo Martínez Foundation received a message from a person who had a small painting which she was considering selling. The owner explained that she would rather have it acquired by a collector in Mexico and that she had thus contacted the Foundation for advice.

The painting was of a small head in green tones, in A4 format, dated in 1959 and acquired from the artist either in that year or in 1960.

From her email address I concluded that the owner, Fernanda Santa Cruz, lived in France. I made contact with her and we met on my last stay in Paris. I had learnt by then that she was Chilean and had lived in France for many years.

The meeting was very special. Fernanda had taken the painting from home to her office, as well as a framed newspaper cutting showing a picture of her parents, Alfonso and Irene Santa Cruz, herself and five siblings on the day of their arrival in Mexico in 1959. Alfonso Santa Cruz, a distinguished Chilean diplomat, was director of the Regional Office of CEPAL (Economic Commission of Latin America and the Caribbean) in Mexico from 1959 to 1961.

Through links and memories, Fernanda and I concluded that her father and Ricardo Martínez must have been introduced by Francisco Giner de los Ríos, who at the time worked in CEPAL and was a close friend of both. They are no longer with us, but a few days ago Francisco’s son, also a very dear and old friend, confirmed our theory and enriched it with family memories, memories of encounters in Chile, Mexico and Spain, and of a lifelong friendship that was never affected by time and space.

For Fernanda the painting represents “a face that is part of our family. It has watched over us from the wall in the many houses we lived in during my parents’ various appointments. It was not just any face watching: it was the face of a Mexican woman, Indian, pre-Columbian, from Latin America … with something universal in its mystery (I would even say, in its abstraction). It has that special way of looking at those who look at her and yet to look inwards, to show that inner look”.

There must be other such moving stories and paintings. We keep searching.

This month’s work is a sample of what would in time become the personal style of Ricardo Martínez. Works such as this show the origin of his new and characteristic portrayal of the human figure.

By the time this work was produced, the artist had already undergone a formative stage under the influence of his contemporaries and of surrealism, which corresponded to his work during the forties and fifties, and gone through a period in which there are abundance of landscapes made of geometrical figures and of characters linked to the popular tradition, such as stockers, peons, musicians, men eating corn and women grinding it, among others. It is at the end of the fifties when Ricardo Martínez started developing the personal style that would define his production until the end of his life.

During those years as well as during the sixties, the artist produced works like the one being presented this month. It is possible to observe a delicate handling of the strokes, which dilute in the neutral colours on which the painting is based, in this case green. The contour lines, as well as the signature, are in the “sgraffito” technique, which entails scraping the paint layer with a metal or wooden tip or a spatula, thus achieving a blurred effect, with the face half hidden in a masterly combination of darkness and light.

Human heads, in profile or in an angle, as in the work presented today, were a recurring subject in Ricardo Martinez’s creation. His human shapes evidence the presence and the influence of pre-Hispanic art in his works.

The importance of this painting lays in the fact that it is already possible to perceive the plastic features which in time the artist would consolidate in a clearly defined style, such as the use of neutral or primary colours to be found in future works, the contour lines drawn in a soft and diffuse way, the use of “sgraffito” technique and, not least, in the way in which a figure can cover most of the canvas, thus emphasising its volume. 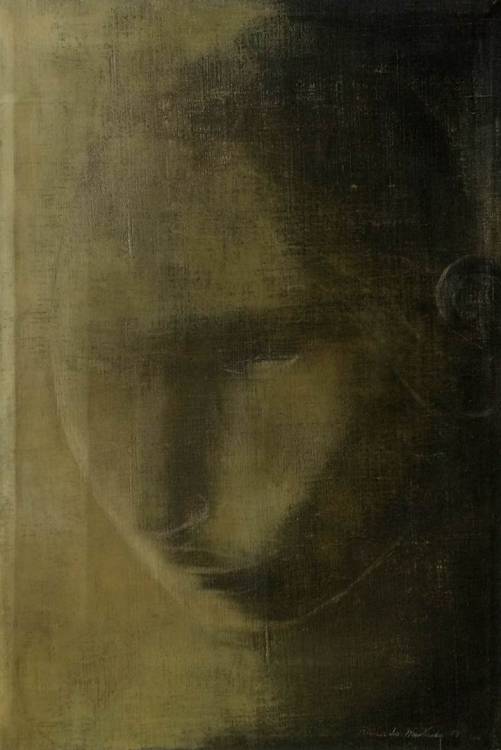