Work of the month
December 2017

The idea of the “sublime” in modern æsthetics[1] was the result of the discussion among theoreticians who, in an attempt to understand the relationship between the observer and reality, made the notion of “perception” the focal point of the debate and came up with ideas about the effect objects had on feelings, emotions, thought, imagination and on the taste of the recipient.  One of the most important contributions is that of Edmund Burke who, in his work A philosophical enquiry into the origin of our ideas of the sublime and beautiful, written in 1757,[2] discussed at depth the way in which certain real objects affect human sensitivity and the way in which it reacts. Burke saw the sublime as a “pleasant terror” caused by concepts such as eternity, the infinite, the powers above and by all that threatened to nullify the human senses. The recipient did not face real danger, his or her terror was only a sensation and thus could produce pleasure.

These ideas were soon adopted by art and in painting the sublime came to be associated with landscape painting, through the reaction of an observer before nature’s magnificence, which overwhelms and underlines his or her fragility and smallness. This created a fear which could be controlled, since the spectator could witness the force of nature without being in any way threatened.

In November 1972 the newspaper The News published “The gallery goer. Redefining the sublime” by Toby Joysmith who, after a visit to Ricardo Martínez’s atelier, described his work as a “redefinition” of the sublime.[3] The art critic made reference to the works executed after 1959, when the artist had already defined his personal style and in particular to the painting Woman with palm, the work of this month. Joysmith compared Martínez to William Turner (late XIXth early XXth Century English painter, whose works are a clear example of the sublime), underlining formal similarities between them, particularly the blurred quality of the images, which Turner achieved through quick and loose brush strokes and Martínez through “dimming”

Joysmith’s comments are important in that they present a different way to appreciate the works by Ricardo Martínez, taking into account what he owes to tradition as well as his innovations. Through the link with XVIIIth Century tradition, it is possible to appreciate the way Martínez presents the interaction between the human figure and nature in Woman with palm, a subject the artist repeatedly presented throughout his life.

In the present work the artist created a harmonious connection between the human figure and nature through several formal elements. Through a masterly handling of light, which brings forward the whole palm and extends to those parts of the body in contact with it, Martínez presented the main subject of the work, the link between man and nature. At the same time, through blurring, Martínez made reference to the atmosphere surrounding the human figure, which again underlines the link. The chiaroscuro or dramatic contrast of light and shadow, achieved by applying luminescent spots on a dark background, conveys a feeling of mystery, another feature of the sublime.

The innovation in this kind of work by Ricardo Martínez is in the way he approached the contact between man and nature. On the one hand he managed to create the feeling of respect and mystery typical of the XVIIIth Century sublime, but on the other he did not present nature as threatening or disturbing, but as a nature that can provide and is close to man. Hence his “redefinition” of the category. 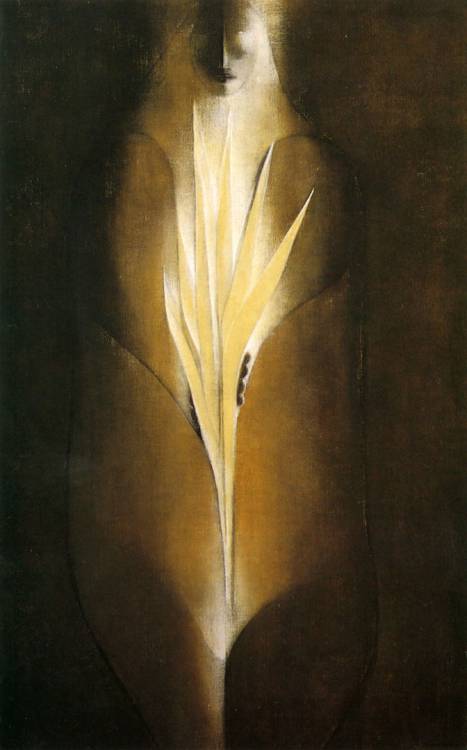