Work of the month
February 2017

The relationship between mother and child is a subject widely portrayed by Ricardo Martínez throughout his production. Although the colours, the composition and the treatment of the human figures and the approach to the subject might change according to the artist’s interests at different stages, all the works have in common an element of love, which conveys deep emotion.

Ricardo Martínez first approached the subject in the 1950s, when he painted the works The cloth and Pietà. The Cloth portrays a woman kneeling beside her dead son while another, standing, holds a cloth covering his feet. In Pietà a woman is holding her dead son in her arms. Both paintings portray the pain on the death of the son and allude to the religious image of the virgin holding the lifeless Jesus in her arms.

Later on, in the mid 1950s, Ricardo Martínez presented the subject again, this time imbuing it with the meaning it would have throughout the rest of his artistic work: the protective attitude form the parent to the child and the intimacy between the two. The artist also portrayed fathers in a similar protective and loving attitude towards the children.

In The Mother (1955), Ricardo Martínez presented a woman with indigenous features taking care of her child, holding it in her arms while it stretches to reach something beyond the perimeter of the canvas. In Motherhood in pink (1957) and Mother and child (1958), the artist worked on the subject by employing, for the first time, the resources typical of his personal style: the diffusion and the creation of volume through the handling of colours, as well as of light and darkness. Both works show the loving attitude of the mother, about to take the child in her arms in Motherhood in pink and to teach the child to walk in Mother and child.

In this way and throughout his work, Ricardo Martínez portrayed mothers holding children either lying, standing or in their arms. The painting hereby presented as the work of the month was produced at the beginning of the 1980s and shows a woman on her knees hugging a standing child. There is a contrast between the volume of the female figure and the slimness of the child, emphasized by her roundness and his long, lithe lines. By thus handling the proportions, the artist stresses the atmosphere of protection within the painting: the child, smaller and fragile, is covered by the heavier and stronger figure of the mother.

The red colour, diffused on a black background, brightens the whole painting. At the same time, the different tones of red on the figures attract the spectator’s attention to the main subject of the work, as through them the artist makes the point of contact between the figures -the woman’s large hands holding the child’s slim legs while his hand rests on her shoulder- stand out. In this way we can observe the affection and emotion in the painting, which in turn are strengthened by the female figure tenderly resting her head on the child’s body. 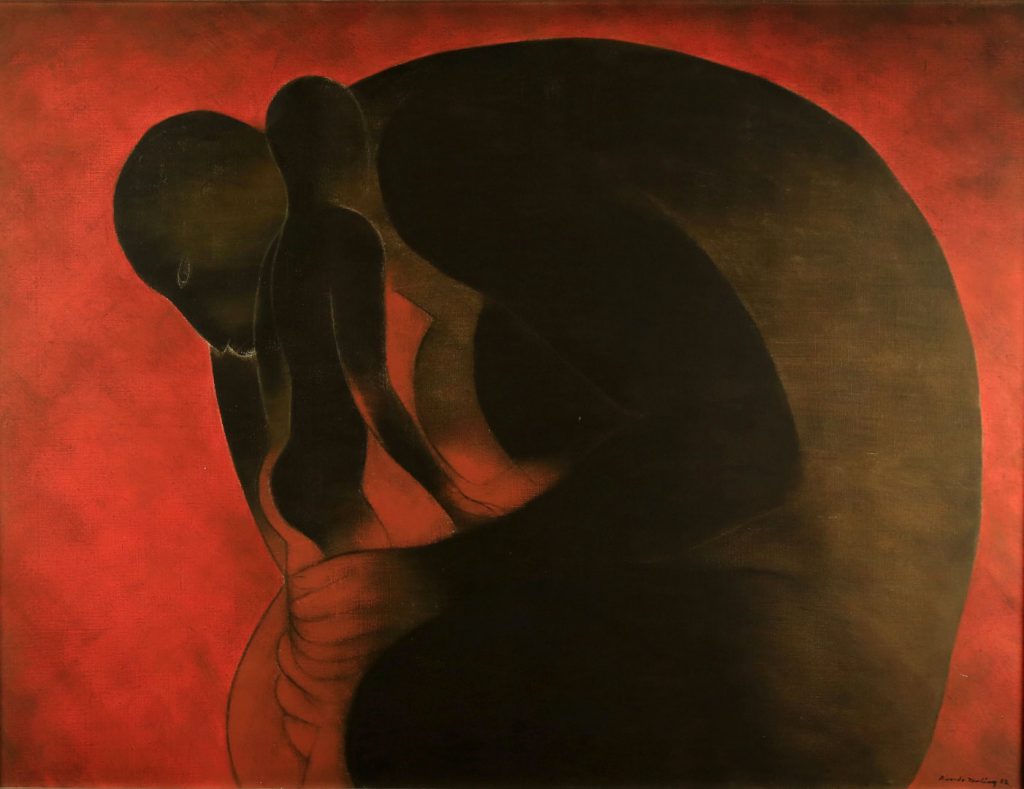